The new Sheen X300 range of flame guns is the most comprehensive ever manufactured, and caters for every requirement.

Many people will ask, “How can I use a flame gun?” but after reading this article, we hope you will realize that Sheen Flame weed burners are truly universal.

They are used for many jobs by the property owner, gardener, and handyman about the house, and also by commercial grower, factory maintenance staff, and a host of people in every walk of life.

Labour is scarce – especially the man who used to come and look after your garden and it is surprising how quickly drives, lawns, borders, and vegetable gardens assume a neglected appearance. No matter how much of your spare time you devote to them, pesky weeds seem to find a way to sprout.

In fact, the garden becomes a full-time burden which demands every spare moment for its upkeep, otherwise, every time you enter your gate you are depressed by the appearance of your property.

This happened with one of our readers, who having spent endless time and money on other methods, finally decided to try a weed burner torch.

What is the Sheen X300 Paraffin Weed Burner? 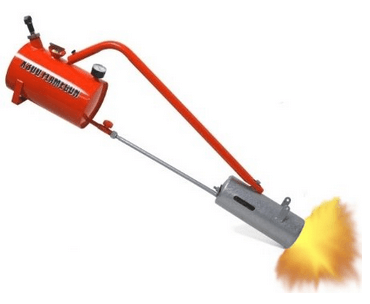 The Sheen X300 garden flamethrower is an alternative to the many methods of weed control available today. It is a very effective way that does not require the use of chemicals or the need for manual weeding.

It was originally designed and manufactured by H.K. Prichard in England in 1952. Today, it is one of the world’s best-selling flame guns.

This flame gun uses a heat source measured at 2000 degrees Fahrenheit and control flame to stop the sap rising, so the top growth dries out within a few days. After treatment, the weed seeds will leave behind potash-rich matter.

The Sheen X300 Paraffin burner is built with a positive-action large capacity pump, a unique hinged hood that can be folded back when not in use, a new easy-start burner, and a quick detachment handle from chassis. Sheen gun models X400 and X500 also have these features.

It gets rid of weeds, fungus, moss bacteria and insect pests. It is ideal for use in the home garden, farms, pig farms, kennels, poultry farms stables, and for landscaping contractors.

How to Use the Sheen Flame Gun

The basic unit of the system is the Sheen weed wand, the tank of which is all-welded construction and pressure tested. Most models incorporate built-in pumps and pressure gauges. Paraffin is the recommended fuel to use with the gun, which has a unique burner that develops a heat of 2,000 degrees Fahrenheit.

This whole system, although of robust construction, is well balanced and can be swung in an arc without lots of effort being exerted. For prolonged use, a webbing shoulder strap should be clipped onto the handle and main weight of the gun distributed in that manner.

In some application, such as inter-row weeding, or on paths and drives, the gun is found to be much easier to handle when mounted on a wheeled chassis.

You may also want to scarify your lawn with the best lawn raker prior to treatment.

The flame torch can be attached and detached in an instant, and no special screw or clamps are involved. The hood which can likewise be fixed in a matter of moments is useful in such places as shrubberies, orchards, and between rows of growing crops.

For further information of use, refer to the product’s instruction manual.

The Sheen flame gun not only gets rid of weeds but it also cleans up the ground surface, free from seeds and harmful bacteria which are ideal conditions for replanting.

Sheen weed burners work on the same principle as pressure stoves, blowlamps, and lanterns, although they are, of course, many times larger.

The fuel is contained in an air-tight tank and is fed to the burner via the control valve by air pressure supplied by the pump.

The burner is of the vaporising type, in which the fuel is pre-heated and vaporised by passing through a coil heated by the flame.

To start the gun, the burner must be pre-heated so that it is at a temperature capable of vaporising the fuel when the control valve is opened.

The flame produced by this means maximum efficiency with a core temperature of 2000 degrees Fahrenheit while using only 6% fuel vapour to 94% air.

Paraffin also called Kerosene is a flammable waxy solid that is burned as fuel. It is a blend of various simple hydrocarbons. Paraffin is made from coal, wood, and oil shale, and can also be distilled from petroleum.

This weed torch has surpassed some of the highest safety requirements. The fuel contained in an all-welded steel tank, capacity one gallon, which has been hydraulically tested to three times working pressure to ensure absolute safety and freedom from leaks.

Weeds are the biggest pest the gardener has to deal with, and while standard methods of dealing with them, such as hoeing, digging in, etc., appear to achieve results, within a very short time they are all back again.

The reason for this quickly becomes apparent to the flame gun user.

After burning away the top portion of the seeds, the gardener observes that the soil is covered with a layer of seeds, which by normal methods would be dug into the ground, to re-appear with greater strengths than before.

The flame gun destroys all weeds, seeds, pests, and bacteria. It sterilises the soil surface, so that after preparing the ground and sowing, plants are given the best start they could have, i.e. freedom from competition with weeds.

If you found this article by our website helpful, help us out by sharing through your favorite social media platform or leave us a comment below.